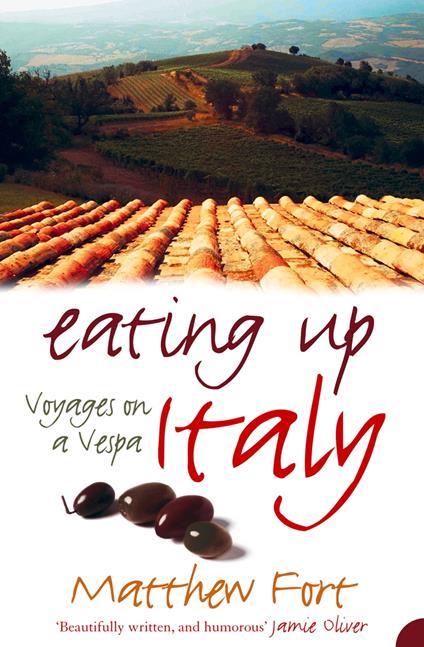 
Italy’s tumultuous history can be traced through its food. In an epic scooter trip from the Ionian Sea to the far north, distiguished food writer Matthew Fort explores the local gastronomy and culinary culture of a country where regional differences are vibrantly alive.

In no other country is food so much a part of everyday life as it is in Italy. Matthew Fort's plan is a simple one: to travel by scooter from Melito di Porto Salvo – the southernmost town in Italy and where Garibaldi landed in 1860 to begin his conquest of Naples – to Turin in the north, eating drinking, talking and noting as he goes.

Passing through Calabria – rich in spices, Arabian-influences of almonds and dried fruits, as well as Spanish chocolate (Fichi al Ciocolatto, mostacciolo) – and on to Campania – from where the historic Nepalese pizza has become infamous – Fort discovers the rich connection between historical tradition and cuisine. The Italian genius for combining abundance and thrift is evident from the economy of the mountainous and sparse landscape of Molise, where much use is made of pastas and chillies, and adjoining lush Abruzzo, with its delicious cheeses and risottos.
Fort travels on to Emilia-Romagna, where much of what we have come to love in Italian food can be found: prosciutto di Parma, mortadella, ravioli, taggliatelle and zamponi.In Piedmont, the wine-and-truffle country stretching from the shadow of the Alps through arable flatlands, the cooking of France and Northern Europe fuses with that of Italy. This enticing sum of parts – the dishes, producers, ingredients, consumers and eating occasions – make up nothing less than a contemporary portrait of the country.