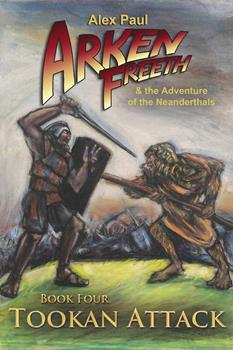 A battle is looming between the Tookans and Arken Freeth's band of Lantish, Tolarian, and Nander warriors. Who will survive?

The Pirate King Yolanta's fleet has fled to Situn, a barbarian settlement on the northern coast of the Circle Sea. Once provisioned, Yolanta plans a return to the River Zash and a final battle that will secure the Necklace of Tol for the Amarrat King.

But before Yolanta can return to crush the Nanders, he will face betrayal and death at the hands of the hostile residents of Situn, the treacherous walled city of the North.

A troubling vision has warned Arken Freeth that Yolanta and his men will soon storm the Nanders' Water Cave. In order to save the Nander tribe and protect the Necklace of Tol, Arken, Talya, and Asher must forge weapons and train the Nanders in the art of modern warfare, an impossible task when the Nanders follow The Way and are so resistant to change.

Mar discovers that Arken is the Jalet-hoi, the one foretold to be the savior of the Nanders. But in order to fulfill this powerful prophecy, Arken must survive a duel with Jen, the tribal chief's son, to save his friend Ord's life.

No one, not even Asher or Talya, believes Arken will win this fight with such a powerful warrior. Even if he does live, will their battle training be enough for them to build a Nander army skilled enough to survive the Tookan Attack?