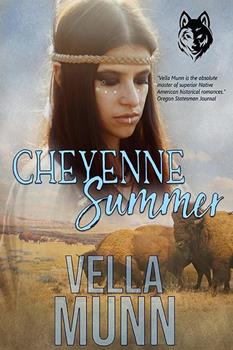 Summer, 1800. There is no rain. Heat bakes the prairie. What little game survives on the trickles of water in the shrinking creeks is fiercely hunted not just by the Cheyenne, but by their enemies, the Pawnee.

In the midst of a buffalo hunt that becomes a battle when Pawnee warriors attack, a young Cheyenne brave, Grey Bear, discovers that his joy in killing outweighs his pride in bringing home meat for his hungry people. But the meditative Lone Hawk realizes for the first time that the Pawnee must be starving, just like the Cheyenne.

In the Cheyenne village, the beautiful Seeks Fire learns that the brave she idolizes is not the gentle soul she believes him to be. Her close friend, Touches the Wind, discovers her own bravery during an inferno that scorches the plains and destroys half the village.

The growing tension between Grey Bear and Lone Hawk threatens to destroy their people, but maybe the love between a brave and a maiden will save them all.