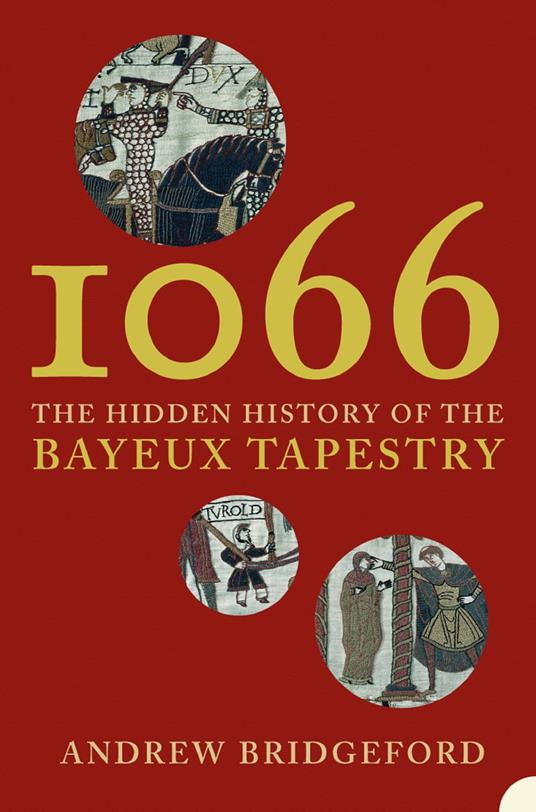 1066: The Hidden History of the Bayeux Tapestry A brilliant new reading of the Bayeux Tapestry that radically alters our understanding of the events of 1066 and reveals the astonishing story of the survival of early medieval Europe’s greatest treasure.

The Bayeux Tapestry was embroidered (it’s not really a tapestry) in the late eleventh century. As an artefact, it is priceless, incomparable – nothing of it’s delicacy and texture, let alone wit, survives from the period. As a pictorial story it is delightful: the first feature-length cartoon. As history it is essential: it represents the moment of Britain’s last conquest by a foreign army and celebrates the Norman victory over the blinded Saxon Harold. Or does it?

In this brilliant piece of detective interpretation, Andrew Bridgeford looks at the narrative contained within the tapestry and has discovered a wealth of new information. Who commissioned it? Who made it? Who is the singular dwarf named as Turold? Why, in a work that celebrates a Norman conquest is the defeated Harold treated so nobly? Is Harold indeed the victim of the arrow from the sky? And who is the figure depicted in the tapestry who, at the moment of crisis for the Normans rallies the army just at the point when it mistakenly believes William is dead and it will be defeated?

Using the tapestry, the book retells with vivid characterisation the story of the remaking of England in and after 1066. It is a compelling story, as is the tale of the extraordinary survival of the tapestry itself: history has rarely been writ so large, with such fine detail and yet been so veiled in mystery.