Doris Lessing's first book after winning the Nobel Prize for Literature revisits her childhood in Southern Africa and the lives, both fictional and factual, that her parents led. 'I think my father''s rage at the trenches took me over, when I was very young, and has never left me. Do children feel their parents' emotions? Yes, we do, and it is a legacy I could have done without. What is the use of it? It is as if that old war is in my own memory, my own consciousness.' In this extraordinary book, Doris Lessing explores the lives of her parents, both of them irrevocably damaged by the Great War. Her father wanted the simple life of an English farmer, but shrapnel almost killed him in the trenches, and thereafter he had to wear a wooden leg. Her mother Emily's great love was a doctor who drowned in the Channel, and she spent the war nursing the wounded in the Royal Free Hospital. In the first half of this book, Lessing imagines the lives her parents might have made for themselves had there been no war, a story that has them meeting at a village cricket match as children but leading separate lives. This is followed by a piercing examination of their lives as they actually came to be in the shadow of that war, their move to Rhodesia, a damaged couple hulking over Lessing's childhood in a strange land. 'Here I still am,' says Doris Lessing, 'trying to get out from under that monstrous legacy, trying to get free.'
Leggi di più Leggi di meno 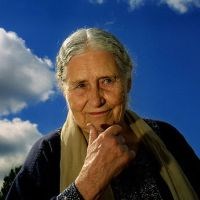