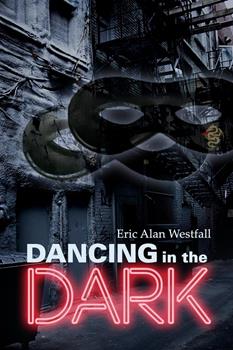 Dancing in the Dark

An old high school in a dying neighborhood. It's ruled by two wolf-packs: the Dragons and the Monarchs. Masked at night, by day there is no sign or symbol to mark their allegiance. But still the students know who to fear—the instincts of terrified prey scenting prowling predator.

Two friends, fifteen, too old for boys, too young for men, no pair of lean Marine machines, just ordinary size and shape, one tall, one shorter, not by much. By alphabetic chance, their names are paired when Noah's two-by-two is called. They never talk about the danger if the packs find out they're paired in more than class. They make themselves content with just the little that they have, though wishing, aching deep inside for something more.

And once, just once, they had a day. Or only hours, not even that. They didn't dance in light or dark, but in a dimness made of boarded windows, and random holes where nails had been, that draped thin strands of sunlight across them both.

But now...they're faced with dancing in the dark when wolf-packs meet.

Warning: This is a gay teen version of Romeo and Juliet, and a variation on a West Side Story theme. There is no HEA.