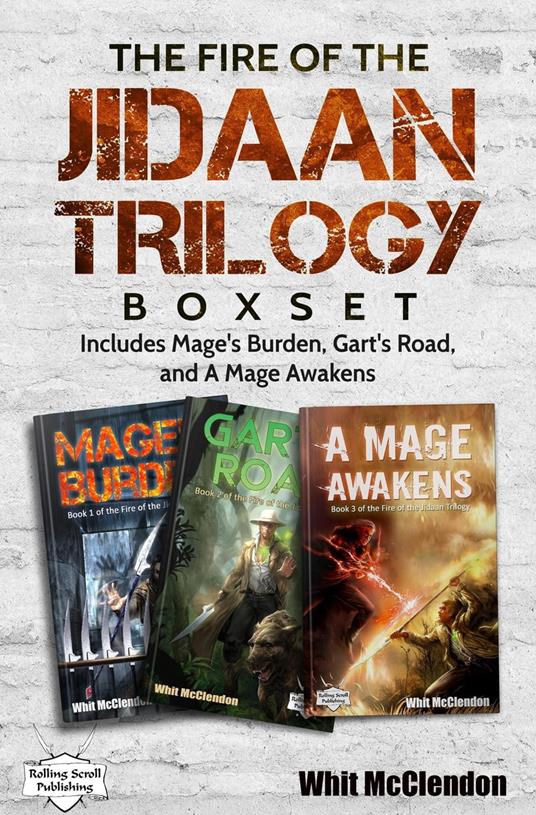 The Fire of the Jidaan Trilogy Boxset: Including Mage's Burden, Gart's Road, and A Mage Awakens 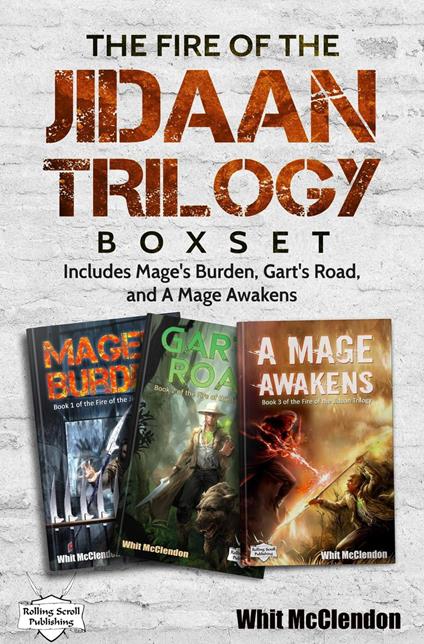 
Fans of Both Epic Fantasy and Superheroes Agree.it's LOTR meets The Avengers! Readers who enjoy epic fantasy with mages, monsters, swords, sorcery, and heroes battling against all odds will definitely enjoy this series!

For over two thousand years, the Realm of Talwynn has known peace. But now, an unfathomable evil has broken free. Mordak has risen, and the time for battle has come once more.

Brunar, a noble Mage, turns to the magick of the Jidaan for aid. The Jidaan, six powerful and ancient weapons, were once wielded by trained Guardians. They had been fierce warriors, highly skilled in the use of the magickal powers of the Jidaan. Now, those Guardians are long dead, and the Jidaan lay silent.

Even as Brunar searches for the newly chosen Guardians, Mordak unleashes his army of hideous creatures and undead soldiers across the land, drenching it in blood. Brunar works feverishly to train his new Guardians in time, but not all of those Chosen accept their destiny.

As war erupts, Talwynn's bravest men, women, and the elf-like Weya answer the call to arms as Brunar leads the struggle against Mordak's bloodthirsty horde of abominations. The untested Guardians must rise to the challenge, or else watch Talwynn burn...

After the brutal murder of his family, Gart's voyage continues as he searches for the weapon that was promised him by the Mage, Brunar. Once a peaceful farmer, who only wanted to be left alone, Gart must now become something more. Struggling with the powerful magick that grows within him, Gart follows a dangerous path. Only with the fabled Jidaan of Storms would he have a chance against Mordak's Champion, the demon-bred Jor Dayne.

Guided by the noble Brunar, the other five Guardians make their way to Laro, hurrying to reach the walled city before Mordak's army. Brunar and the elf-like Weya guide the Duke and his army of fierce warriors as they face an enormous, bloodthirsty horde of nightmarish creatures. The dead will rise and evil will walk the walls of Laro if Mordak has his way.

Combat erupts on the walls as evil forces attack, yet Gart must battle his own demons.alone.

The power of the evil sorcerer, Mordak, has grown, and Brunar and the Guardians must somehow fight their way free of his clutches. Using all of their combined powers, as well as the aid of powerful ape warriors and enormous spiders, the Guardians must make their way to the final battleground of Alverton Falls.

Across the continent, the reluctant Gart finally accepts the Jidaan of Storms and the incredible powers that come with it, but his challenges have only just begun. With his new companion, Beauty, an enormous and scarred mastiff, at his side, he faces river daemons and savage monsters on his way to join the Guardians in their final battle. Will he survive to aid them in time? The fate of Talwynn hangs in the balance as brave heroes face overwhelming odds, deadly dark magick, and the wrath of a Daemon-God.