The Search for the Dice Man

The Search for the Dice Man Luke Rhinehart
€ 12,68
Ritirabile presso:


The sequel to the cult classic The Dice Man, this book can also change your life! Larry Rhinehart is the son of an infamous father - the renegade psychiatrist Luke Rhinehart, otherwise known as the Dice Man. Luke became a cult figure in the seventies, inspiring thousands to follow him into the anarchic world of Dice Living, where every decision is made not by the self, but by the roll of the dice. Larry, however, is emphatically not a follower. He has grown up to have a great respect for order and control. A wealthy Wall Street analyst, all set to marry the boss's daughter, Larry has got life where he wants it. Until rumours begin to circulate about the reappearance of his long-vanished father - and Larry's carefully organized world begins to look a lot less certain. By turns funny, moving and wildly erotic, The Search for the Dice Man is a journey of the body and spirit never to be forgotten.
Leggi di più Leggi di meno 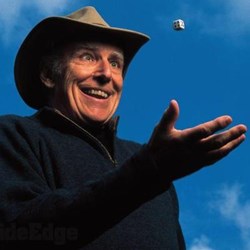