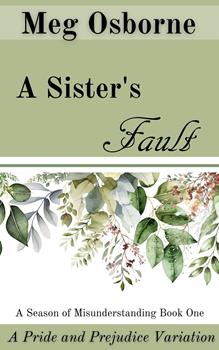 If connections alone could not be enough to guarantee a suitable match, nor beauty, was it really so dreadful to turn one's focus to any other opportunity to tip the scales in one's favour?

Jane Bennet has been gifted an opportunity and she is not afraid to use it, feigning illness in order that she might remain a little longer under the Netherfield roof, and hopefully move one step closer to securing Mr Bingley's heart. She doesn't expect her sister to arrive, bedraggled and covered in mud, ready to spoil everything she is working for!

Fitzwilliam Darcy's interest in Elizabeth Bennet grows when, out of sisterly devotion, she treks miles to be at Jane's side and restore her to health. When she is similarly stricken he finds himself emulating behaviour he has all too recently despised in his friend. He cannot help it, and is rapidly developing an affection for the young woman he scorned at the Meryton Assembly. When he overhears a conversation that suggests the illness that kept both ladies at Netherfield was a lie, he realises his first assessment was correct. Elizabeth Bennet and her sister are manipulating their way into marriage, and he is determined to stop them.

A Sister's Fault is book one in the Season of Misunderstanding series of Pride and Prejudice variation novellas.