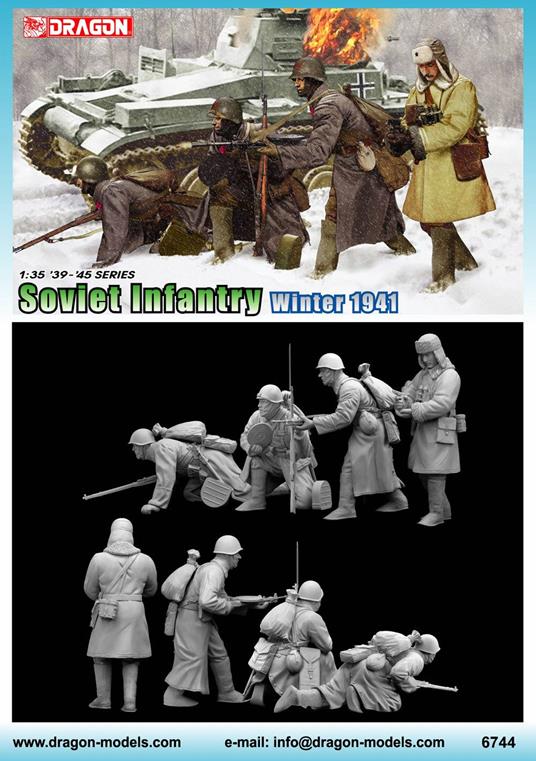 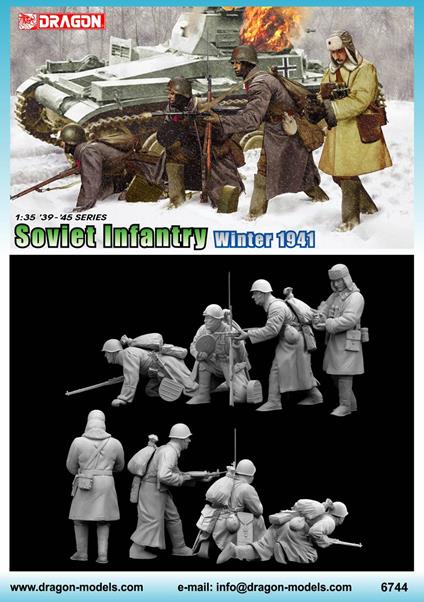 
Dragon has released Soviet infantry figures in its 1/35 scale series before, but never before has it offered soldiers from the 1941 winter period. Thus the stage is set for this exciting release! Germany mounted a massive invasion of the Soviet Union on 22 June 1941, and the powerful force's momentum took troops to the very gates of Moscow. However, amidst stiffening Soviet resistance, freezing weather and badly overstretched supply lines, the attack slowed and stalled. Stalin had been transferring fresh troops from Siberia and the Far East since autumn, and in early December 1941 they helped launch a counteroffensive near Moscow. These troops were better equipped for cold-weather operations than the Germans, and as they advanced, Soviet forces drove a gap between Army Group North and Army Group Center. It's from this desperate period of winter fighting that this figure set emanates. The box-top illustration shows four Soviet soldiers dressed for winter combat. They wear uniform gear such as greatcoats, sheepskin jackets, toques, mittens/gloves and fur boots. The action poses are very suitable for depicting a combat scene in the snow and ice, and the sculpting of the plastic is sharp and realistic. The soldiers also wield weapons suitable for this time period of 1941, including Mosin-Nagant rifles and a DP28 light machine gun. Of course the figures could also find application in a different setting (in the winter fighting against Finland, for example) so they will prove very versatile. This new Dragon set will find a niche amongst modelers as there is little else available representing this period of the Great Patriotic War. REVIEWS: Kit Review: Dragon Models Limited 1/35 scale '39-'45 Series No. 6744; Soviet Infantry Winter 1941; 114 parts in grey styrene; pre-order price US$16.95 via Dragon USA Online Advantages: nice new mold kit of Soviet infantry in greatcoats, nice new generic Soviet weapons Disadvantages: so-so box art and painting directions Rating: Highly Recommended Recommendation: for all early war Red Army fans When winter arrived in 1941 the Germans were ill prepared for it, whereas the Russians had a variety of useful clothing for their troops to permit them to fight under the conditions of "Father Frost". This new set provides four Red Army soldiers advancing into combat: an infantryman in a semi-prone position with DP magazine carrier; a DP machine gunner advancing with weapon at the ready; his loader carrying extra magazines kneeling beside him; and an officer apparently checking a compass. The three enlisted men are in greatcoats with standard wartime helmets, and the officer is wearing the sheepskin winter hat and officer's short coat. All have tall felt boots. Each figure has six basic parts - head, torso, arms and legs - as well as two to four supplemental parts for the skirts of the greatcoats and sheepskin coat. Accessories for each individual include canteens, bread bags, and ammunition pouches. The generic weapons include two Moisin-Nagant Model 1891 rifles with separate bolt assemblies and six clips for each one. The neat litle DP machine gun comes with separate bipod legs and hinge and drum magazine. The PPS submachine guns come with only one folding stock between them and the PPSh submachine gun has two drum magazines. The two rifles, DP and PPSh all have hollow bores via slide molding. The artwork is in the less than impressive partially Photoshopped style DML seems to use more and more on their figure sets, and as a result tends to let the set down as it is not the best source to use for finishing or assembly of the figures. Some of the DML figure sets with separate skirt parts have been fussy to assemble, and here there is no mercy for the less experienced modeler. Overall, however, this is a very nice set and should prove popular with BT and other early war Soviet tank fans. Thanks to Freddie Leung for the review kit. -Cookie Sewell- ITEM NUMBER: 6744 SCALE: 1:35 BARCODE: 089195867445 RELEASE DATE: May 2013 LAST UPDATE: 5/16/2013 SERIES: 1/35 WWII Military
Leggi di più Leggi di meno