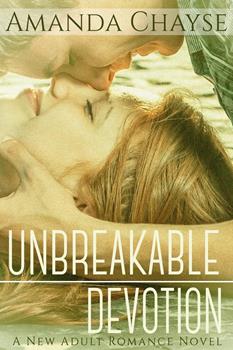 Devon and Erin have always been best friends, ever since they were kids.

Playing football at their high school, Devon is thrown into the cool kids' crowd without any warning. His new friends are rich, cool, and popular...everything Erin isn't. But even the hot cheerleaders throwing themselves at his feet can't stop him from thinking about Erin as more than just the girl next door he grew up with.

Erin has never been able to trust anyone. Her dad left her when she was young, and ever since then life has been a string of disappointments. The only thing holding her together through the struggles has been Devon. And now he's too good for her.

When Erin's world is shattered by a horrific event, Devon can't stop himself from getting involved, but will it rip apart their relationship forever in the process?

Nothing could break their friendship... until one summer changed everything.

“So I have not seen you around.” Devon looked at Erin, wanting to tell her nothing mattered except her, but not here, not now.
“It looks like we have both been busy,” Erin said, steely eyed now, arms tightening. “Well, you guys have fun,” Erin said, walking away.
“Erin, wait!” Devon ran beside Erin, grabbing her shoulders and facing her, looking into her always irresistible eyes. “It’s just a date, Erin. Matt asked these girls out. I didn’t even ask her out.” Devon’s eyes widened in a plea he hoped she would see. Could she hear him?
“But you said yes,” Erin said in a slightly trembling voice. She looked up at Devon, her eyes looming large in the autumn night.
Devon’s stomach tightened as he spoke. “Matt and Shannon just wanted someone to go out with her friend. It’s just an innocent get-together, Erin. It’s nothing,” he said.
“It looks like something from here.” Erin frowned and brushed her long blonde hair off her chest and over her shoulder.
“Erin, why is this bothering you? Why are you acting this way?” Devon scrambled through his mixed-up thoughts to try to defuse the situation.
“Guys can be so dumb,” Erin said with furrowed brows and a grimace. “We’re just friends, Devon. It doesn’t matter. C’mon, Kathy, let’s go.”
Kathy narrowed her eyes at Devon, and sashayed away from him towards her friend and down the sidewalk. Devon gazed at her, his hands in his back pockets, wondering whether Erin wanted to tell him something. He watched them walk away, trying to process what just happened.