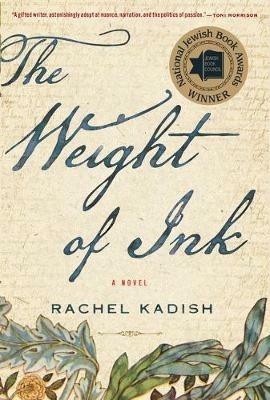 WINNER OF A NATIONAL JEWISH BOOK AWARD A USA TODAY BESTSELLER "A gifted writer, astonishingly adept at nuance, narration, and the politics of passion."-Toni Morrison Set in London of the 1660s and of the early twenty-first century, The Weight of Ink is the interwoven tale of two women of remarkable intellect: Ester Velasquez, an emigrant from Amsterdam who is permitted to scribe for a blind rabbi, just before the plague hits the city; and Helen Watt, an ailing historian with a love of Jewish history. As the novel opens, Helen has been summoned by a former student to view a cache of seventeenth-century Jewish documents newly discovered in his home during a renovation. Enlisting the help of Aaron Levy, an American graduate student as impatient as he is charming, and in a race with another fast-moving team of historians, Helen embarks on one last project: to determine the identity of the documents' scribe, the elusive "Aleph." Electrifying and ambitious, sweeping in scope and intimate in tone, The Weight of Ink is a sophisticated work of historical fiction about women separated by centuries, and the choices and sacrifices they must make in order to reconcile the life of the heart and mind. AUTHOR: Rachel Kadish is the award-winning author of the novels From a Sealed Room and Tolstoy Lied: A Love Story, and of the novella I Was Here. Her work has appeared on NPR and in the New York Times, Ploughshares, and Tin House. SELLING POINTS: Set in 1660s London and the early aughts, The Weight of Ink tracks two women whose lives collide in mysterious ways, and whose respective intellectual and personal ambitions inform and overlap with one another; a historical novel that bears uncanny relevance to the ideas and concerns of our day. Hits that elusive sweet spot - brings to life several fascinating historical epochs (contemporary professor in London gains access to a cache of letters by a woman from 17th-century Holland who works secretly as the scribe of an exiled rabbi from Portugal). With two powerful female protagonists from different centuries telling their stories, weaving in the history of the Jews from Portugal to Amsterdam to London, there is so much delicious material here - so much to learn and talk about. We also plan to include a reading group guide and Q&A with the author in the back matter, and we hope this will encourage reading groups to pick this title for discussion. An intellectually ambitious, suspenseful, and entertaining page-turner; a satisfying and accessible narrative jigsaw puzzle that will appeal to a wide range of readers - historical fiction readers and beyond.
Leggi di più Leggi di meno