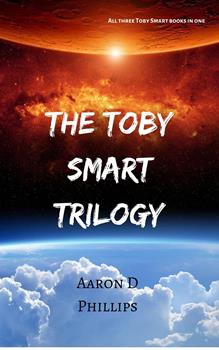 ALL THREE OF THE TOBY SMART BOOKS IN ONE BOX SET.

This is the first book in the Toby Smart YA sci-fi trilogy.

Toby Smart is a bit of a loner. Having spent all his sixteen years living in the small Somerset village of Wickerton with his alcoholic mother, his life is about to be changed, in a big way.

Strange things start happening to Toby that he can't explain, and people close to him start getting disposed of in increasingly mysterious ways. His relationship with best friend Luke is pushed to the limit and someone from his past is about to turn his world upside down. If this wasn't bad enough, aliens with chronic OCD are intent on sabotaging the lives of those closest to him for reasons he could have never imagined.

Toby Smart and the Battle Of Urkan is the second book in the Toby Smart YA Sci-Fi trilogy.

After waking up on the alien planet Urkan, Toby, Luke and Sarah embark on a journey to find their lost friends. It won't be an easy task as the Dark One and his troopers unleash everything they have in an attempt to find them first.

Relationships are once again tested as Toby and his friends find themselves caught in a conflict that could have devastating consequences for them and for those on Earth. Toby has to harness everything he has learned so far to do battle once again with deadly aliens and their chronic OCD.

Toby Smart and the Fight For Earth is the third and final book in the Toby Smart YA Sci-Fi trilogy.

Having woken up on Earth, Toby, Luke and Sarah were sure their battle with the Dark One and his band of obsessive-compulsive troopers was over. It soon becomes clear that's not the case as they are once again flung into a final fight that will determine humanity's future.

Toby is reunited with some old friends from Urkan as they take on the Dark One in a bloody battle for the very last time.