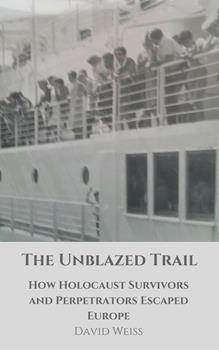 The Unblazed Trail: How Holocaust Victims and Perpetrators Escaped Europe

The Unblazed Trail: How Holocaust Victims and Perpetrators Escaped Europe
3,99 €

The Jews of Europe were trapped. Anti-Semitism had been an issue in Europe for centuries, but the sentiment increased exponentially when the Nazis rose to prominence. An attention-getting orator, Adolf Hitler laid out the case that the Jews were responsible for Europe's woes. The economic penalties after WWI hurt the German economy and Hitler used the struggle to blame the Jews. Even as the economy improved, Hitler stayed true to his message.

The ramp up of anti-Semitic rhetoric and behavior in Europe was persistent during the 1930's. The Jews in countries such as Poland, Hungary, Czechoslovakia, Bulgaria, Italy, Greece and Yugoslavia also felt the ferocity of the anti-Jewish movement. Many of these countries were establishing new laws modeled after the Nuremberg Laws which stripped Jews of their Human Rights.

Nations did not simply allow Jews to leave. They often times required that the Jews give up their financial possessions. How could they get a ticket and be able to settle elsewhere without any financial means? Many Jews simply didn't have a lot of money. Making the final decision to pick-up and leave was also difficult.

The other huge obstacle was the fact that nobody wanted the Jews to enter their country. After World War I, many nations in the world took a more isolationist approach. The United States and other countries also had a large issue of their own with anti-Semitism.There was simply no place to go to.

The countries in this book accepted some Jews. Some, like the Dominican Republic, wanted to accept more, but by the time everything was set-up for them to cross the Atlantic, it became too dangerous to make this journey. Other nations like Bolivia had a small program in place which was paid for and run by one influential individual. In general, the small quotas these countries had set were not filled due to the difficulty of getting Jews across the Atlantic and other troubles. These nations did, however, play a role in saving some Jews from the horrors of the Holocaust.

This book also highlights the willingness (or lack of willingness) of these nations to accept Holocaust Survivors after the war. One of the big lesser-told tragedies of the Holocaust was the inaction of the world community post-WWII.

My grandparents all found themselves in difficult spots after the Holocaust. My two grandparents from Poland ended up in Displaced Persons Camps. In 1946 they found a new home in Belgium. They lived peacefully in Belgium until 1961 and had their only child, my mother, in 1949. In 1961 they received sponsorship through a cousin and a synagogue in Wisconsin and came to the United States. My other grandmother was in hiding in her home country of Slovakia during the war. She stayed in Slovakia after the war because it was re-formed as Czechoslovakia and run as a free, democratic nation. My grandfather was a Slave Laborer and ended the war in hiding as well. He also stayed in Czechoslovakia. They got married and lived in grandma's hometown of Trnava until 1949. By 1949 the communists had taken over the government and most of the Jews of Slovakia left for the new nation of Israel. My grandparetns stayed in Israel until 1952 when my grandmother's niece in the United States married a well-to-do businessman whose parents sponsored my grandparents and my father who was five years old at the time. Most Survivors were not this fortunate.

The 2nd part of this book details several of the escapes from Nazi War Criminals. These profiles highlight the anti-semitism that existed worldwide even after the Holocaust. See how "the ratline" operated.