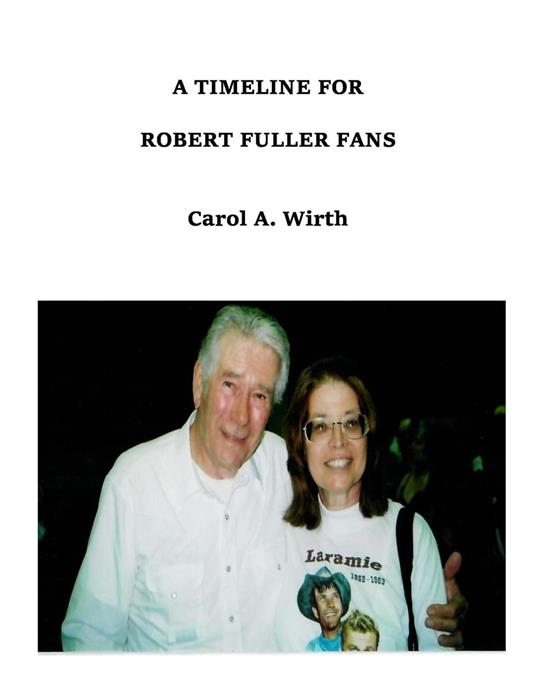 A Timeline for Robert Fuller Fans 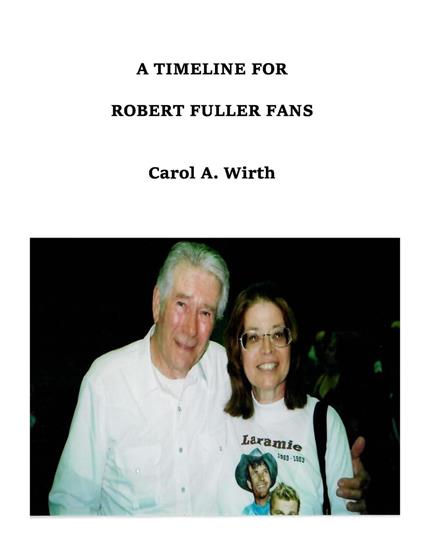 
A Timeline For Robert Fuller Fans is written by a long time fan, Carol A. Wirth. Her personal items, experiences and research created this look back in time. The intent of this ebook is to educate new and old fans about the life of actor Robert Fuller. She wanted to thank Bob for a lifetime of enjoyment watching his performances and to thank him for meeting her and his many fans.

Fans can thank Robert for entertaining them too. A portion of all sales will go to Robert and his wife Jennifer's favorite charity, The Wounded Warriors. You can have fun learning more about Robert and make a difference.

Are you are a fan from Robert's Laramie days or did you discover him more recently on reruns? Are you a Wagon Train or Emergency fan? Do you know him from the many movies he has been in? Fans get mini summaries and background info. Are you curious about production staff, co-stars and guest stars Robert worked with or knew? Besides birth and death dates you may find official websites or mini bios.

A Timeline for Robert Fuller Fans gives fans a glimpse into Robert's early life as a stunt man, extra and later as a leading man working in movies and television. The author shares websites where even some of his earliest 1950's performances can be seen along with interviews, award presentations and festival appearances. Robert Fuller fans will find many hours of viewing choices.

The ebook also lists books and Internet sites Robert is in and YouTube tributes that fans created. Many resources, including his official website, are shared for fans to obtain items related to Robert's career. For western fans, there is a real West chapter including settings where Robert portrayed real people and numerous places to see and experience what cowboy life was like. Other western stars, artists and singers are included so they can be remembered too.

Fans around the world continue to love Robert and his work. Fans admire and love him as a person. A Timeline for Robert Fuller Fans helps all of us celebrate the magic of Robert Fuller. Enjoy!

Young and older eyes can enjoy the easy to read format. Using ebooks is easy with a quick download of programs, like Adobe Digital Systems, that allows fans to read ebooks without buying a reading device. A Timeline for Robert Fuller Fans has several distribution choices that also include other ebooks the author has written that you might enjoy.